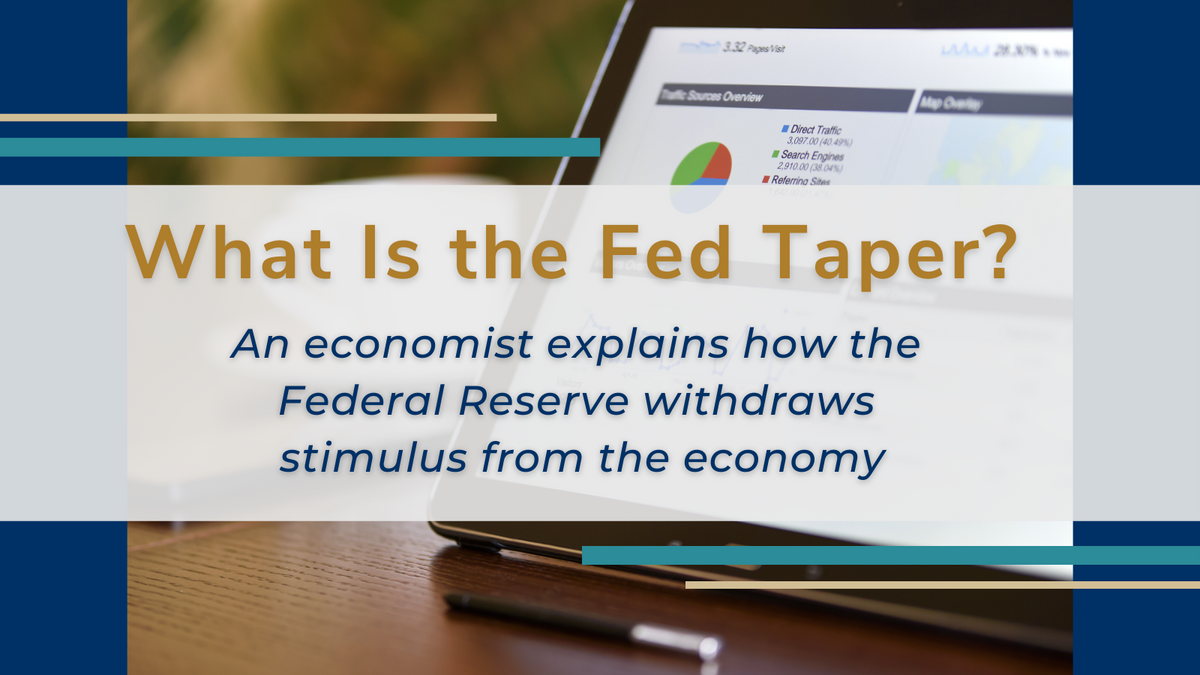 What is the Fed taper?

Tapering refers to the Federal Reserve policy of unwinding the massive purchases of Treasury bonds and mortgage-backed securities it’s been making to shore up the economy during the pandemic.

The unconventional monetary policy of buying assets is commonly known as quantitative easing. The Fed first adopted this policy during the 2008 financial crisis.

Normally, when a central bank wants to reduce the cost of borrowing for companies and consumers, it lowers its target short-term interest rate. But with its target rate at zero during the 2008 crisis – at the same time that there was no inflation and the economy was still hurting – the Fed was no longer able to cut rates further. And so the Fed turned to quantitative easing as a way to continue to reduce borrowing costs. When the government buys assets, their prices go up, which lowers their yield or interest rate.

The Fed again adopted this policy in March 2020 after the COVID-19 pandemic resulted in a national lockdown. By November 2021, the Fed had bought over US$4 trillion worth of Treasurys and other securities.

The Fed decided to double the pace at which it tapers on Dec. 15. Rather than $15 billion, the Fed will reduce purchases by $30 billion every month. At that pace it will no longer be purchasing new assets by early 2022. 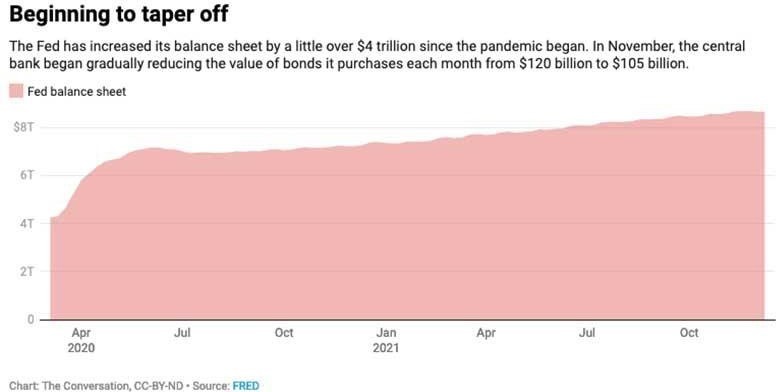 Growing concerns among economists that rising inflation could harm the economy are likely a big part of what led the Fed to begin tapering.

Inflation is the rate of change in the price of goods and services. The Consumer Price Index, which includes several categories of everyday items that a typical American might buy, is the measure of inflation most often reported in the media. In November 2021, it was up 6.8% from a year earlier.

By any measure, inflation is above the Fed’s target of 2%. By tapering asset purchases, the Fed may help reduce inflation – or at least slow its rise – because it is withdrawing some of the monetary stimulus that is fueling economic growth.

The reason the Fed has decided to accelerate the process is likely because it now believes inflation may be less transitory than it had hoped, at the same time that the labor market appears strong.

What this means for you

Americans have enjoyed rock-bottom interest rates for the better part of the past 13 years, helping to make it cheaper to borrow money to buy cars and homes and start businesses.

Consumers and companies are already beginning to see slightly higher rates on mortgages, business loans, and other types of borrowing.

In other words, the era of cheap money may finally be coming to an end. Enjoy it while it lasts.

Content in this material is for educational and general information only.

Treasuries are a marketable, fixed-interest U.S. government debt security. Treasury bonds make interest payments semi-annually and the income that holders receive is only taxed at the federal level.

Inflation is the rate at which the general level of prices for goods and services is rising, and, subsequently, purchasing power is falling.

Consumer Price Index: Examines the weighted average of prices of a basket of consumer goods and services.

This article was prepared by RSW Publishing, Inc.

RSW Publishing has an agreement to republish this author's content.

This is an updated version of an article originally published on Nov. 3, 2021.