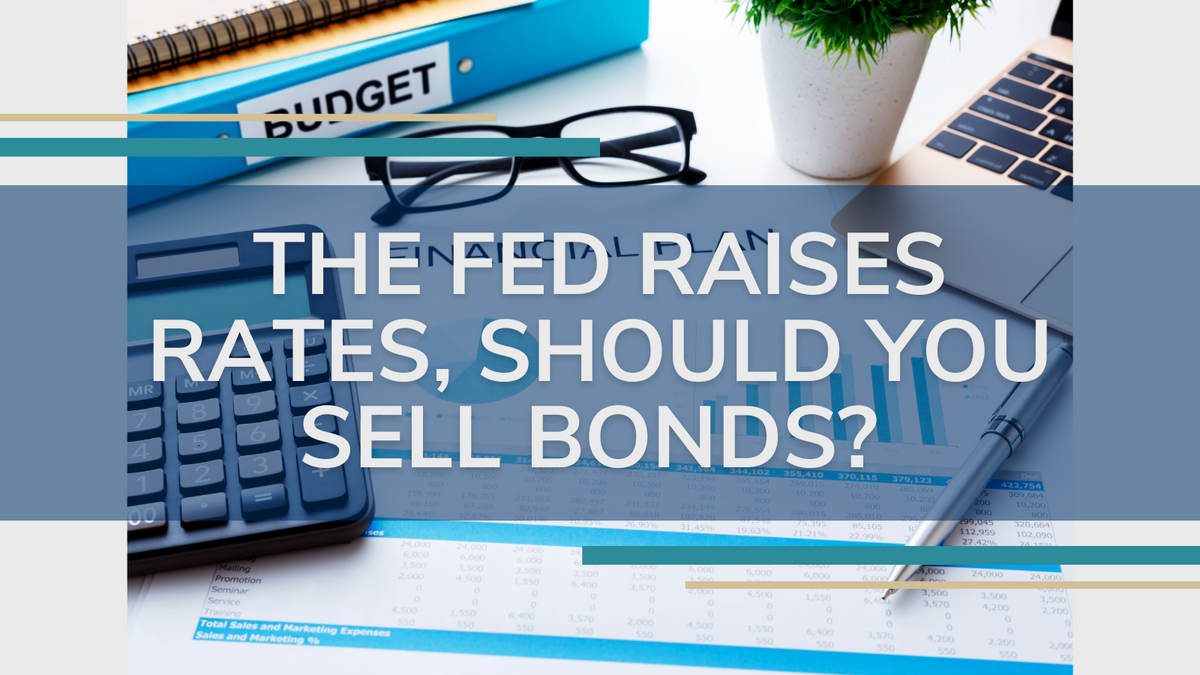 The Fed Raises Rates, Should You Sell Bonds?

On May 4th, the Federal Reserve raised interest rates by 50 basis points and scaled back other pandemic-era economic supports, as it stepped-up its fight against the highest inflation we’ve seen in 40 years.

“Inflation is much too high,” Federal Reserve Chair Jerome Powell said. “We understand the hardship it is causing, and we are moving expeditiously to bring it back down. We have both the tools we need and the resolve that it will take to restore price stability on behalf of American families and businesses.”

The May rate hike was the sharpest from the Fed since 2000 and the second of what is expected to be six or seven rate hikes in 2022.

In no time, the warning bells were ringing like this headline: “Lookout Retirees, Here Come Rising Interest Rates.” The headline warns us to adjust our investment strategies as bond prices, which move in the opposite direction from rates, slide.

Here is a headline from the Wall Street Journal on May 6th: “It’s the Worst Bond Market Since 1842. That’s the Good News.” But the sentence under the screaming headline said this: “The four-decade long bull market in bonds is over, but that doesn’t mean you should dump them.”

The basic premise of these warning bells and scary headlines is that Federal Reserve rate hikes will hurt bond returns so much that investors should reduce their bond allocation. Before taking cover and preparing for the impending rate raises, consider some of the faulty logic encouraging investment action.

What’s not well understood is that the Federal Reserve does not set or directly control intermediate and long-term interest rates that matter most to bond prices. The federal funds rate affects extremely short-term rates, and thus has a strong impact on the yield of money markets, bank savings accounts and floating rate loans. It has much less influence on longer-term rates, which are a function of bond investors’ trades and market expectations.

Let’s go back to a period of Federal Reserve rate hikes which began in June 2004 for a clear example of the disconnect between the fed funds rate and longer-term interest rates.  On June 29, 2004, the day before the Federal Reserve began to increase rates, the 10-year U.S. Treasury yielded 4.7%.  Within three months of the first rate hike, the 10-year’s yield declined below 4.0%.

That is, the Fed increased rates, but bond yields went the opposite direction.  A year after the first rate increase, the 10-year Treasury yield remained below 4% despite the fed funds rate increasing by two percentage points over that span.

Purchasing a 10-year Treasury the day before the Fed started raising rates and holding it for a year resulted in a return of 10.1%.  A 20-year Treasury held over that same time earned 19.2%.

One reason: Back then, China’s government was an eager buyer of long-term Treasuries, which drove up their prices and pushed down their yields. Today, that might not be the case, but for many foreign investors, especially amid troubles in Eastern Europe, long Treasuries are the safe-harbor investment of choice. So much for the concept that you don’t want to own bonds when the Fed is increasing rates.

If the market anticipates that Fed rate hikes are likely to trigger an economic slowdown, recession or simply curtail any inflation pressures, expect longer-term bond yields to decrease, not increase.

It’s a fallacy to simply say that higher interest rates will hurt bond returns. This belief holds true in the short-term, but not in the longer-term. If you buy a 10-year Treasury today and you’re seeking the highest nominal return over the next decade, the best-case scenario is that interest rates rise dramatically immediately after you purchase the bond.

This logic flies in the face of traditional short-term thinking because most people associate rising interest rates with lower bond prices. True, the bond price will decline in the short-run and you would have been better waiting to buy the bond after rates increased, not before.

But if rates immediately rise, you will be able to reinvest the coupon payments at higher reinvestment rates over the next 10 years, which will make for a higher holding period return over the bond’s decade-long term than if rates had remained constant or declined.

It’s also a fallacy to think that you should sell bonds in advance of Fed rate hikes.  Again, remember that bond yields are not directly tied to the federal funds rate.  Plus, anyone who sells bonds has to find a replacement investment for the sale proceeds.

Cash still pays nearly nothing and stock prices have historically provided lackluster results in rate tightening cycles. Also, predicting outcomes is a fool’s errand. Timing the movement of interest rates has dumbfounded investors for decades and is likely to continue doing so.

If you think you clearly know the future path of interest rates, you may be better served to open a hedge fund and make outlandish profits, than to simply make a few dollars on your own portfolio. Bonds in a diversified portfolio provide protection in stock market selloffs.

While the Standard & Poor’s 500 lost 36.6% in 2008, an investment in 10-Year Treasuries gained 20.1%.  If you’re worried more about sharp portfolio losses than near-term fluctuations, a better idea may be to maintain a bond allocation, rather than to abandon this protection.

What do these fallacies of rising interest rates mean to you? Humans are inherently biased to do something, a point that is not lost on Wall Street.  People prefer action over inaction, regardless of whether inaction is optimal. Since Wall Street profits from investor activity, there will continue to be warnings of rising interest rates and what you can do to preserve yourself, as banks and brokerages have a vested interest in compelling trading activity.

In the words of author Fred Schwed Jr., a stock trader who got out of the market in 1929:

The opinions voiced in this material are for general information only and are not intended to provide specific advice or recommendations for any individual security. To determine which investment(s) may be appropriate for you, consult your financial professional prior to investing.

Inflation is the rate at which the general level of prices for goods and services is rising, and, subsequently, purchasing power is falling.

Treasuries are a marketable, fixed-interest U.S. government debt security. Treasury bonds make interest payments semi-annually and the income that holders receive is only taxed at the federal level.

This article was prepared by FMeX.